What to do with the closed Shedd School building???

While not part of the official closed schools list Shedd School, branch of Bennett Elementary School, had been closed down as of this year. While disappointing it probably shouldn't have been a huge surprise.

Having attended many meetings of the Bennett-Shedd Local School Councils it was noted that there have been an enrollment decline attributed to families either moving from the area or wanting to take advantage of other educational options such as charter schools. Whatever affected Bennett also affected Shedd School as well.

Whatever prompted this decision, Shedd School is now an empty building just like many around the city that have been closed in the past year mainly due to underutilization. Many communities affected are probably considering what they can do with these decommissioned school buildings. Can we afford to let them sit empty without a general use?

Over at RAGE's FB page there was an article about how a Kansas City neighborhood has come to grips with this issue. They turned the school into a community center.

If I recall correctly, this was something that was proposed by former 6th ward Ald. Freddrenna Lyle when unsuccessfully she ran for re-election back in 2011. Although in this case closing down schools hadn't yet found itself on the city let alone the 6th ward's radar. She proposed that when school is not in session that the buildings themselves be turned over to the community for their use.

So we have plenty of closed school buildings throughout the city perhaps it's time to figure out a use for them or at the very least re-imagine a use for the land they sit on. Hopefully if enrollment doesn't turn around for Bennett in the next few years I could see Shedd School becoming at least the new meeting place for the Roseland Heights Community Association.

Also, if you want to see one argument in favor of school closings here's one presented by Artistmac in one of his YouTube vids. This is added while recognizing that there are many who are still upset with the school closings this year.

Finally, the pic below shows this sign posted to Shedd School's backdoor - where once upon a time students would line up before class convenes - announces that for the 2013-14 year all students will attend the sister school at Bennett Elementary. I have a couple of other pics with this one but they'll be shown in another post. 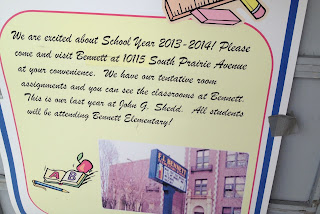