It's graduation season at Bennett-Shedd... 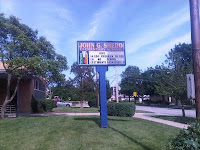 Today Bennett's 8th graders had their commencement. Tommorrow - June 14th - there will be a ceremony for Bennet-Shedd's Kindergartners (KGs). It was announced at the last LSC meeting that they wanted to bring the KGs from Shedd so that they can also use Bennett's auditorium.

When I graduated from Shedd's KG program years ago, there was a ceremony held at the Shedd's auditorium/gymnasium. We used a stage or platform that could be pulled out for specially occasions such as awards ceremonies.

I unfortunately do not have many reminders of this ceremony except more than likely a cap & gown where the tassle was attached to the cap. Probably because young children tend to lose things. I have no certificate from back then and I no longer have my KG class pic. Also I recall finding a program from that day and didn't have the foresight to hold onto one of those.

There are pics that are in an album around the house with pictures of my and my family on the day of the KG ceremony. Around the time of my KG ceremony my bother graduated from Harlan High School. So there are some pictures in that album of him doing commencement at Third Baptist Church near 95th & Ashland.

Either way Shedd's auditorium/gymnasium also became the schools' lunchroom and computer lab before I moved onto Bennett School for 7th & 8th grade. For the purposes of a computer lab the school librarian - Mr. Hackenbrock - would roll the computers on trolleys in order for us to mainly play various computer games. Some of us would play a version of Prince of Persia but also Jeopardy, Wheel of Fortune, or even Where in the World is Carmen San Diego?

After many years of either allowing students to leave home to eat lunch or most students bringing a lunch to school with them, Shedd brought in the lunch program. Thus the gym also became a lunchroom and when there was gym classes usually on Thursdays classes would be held with folded lunchtables and platforms for assemblies off to the side. Rarely as obstacles but they were there.

Well this year KGs won't have the experience I had close to a quarter of a century ago. Can't believe it's been that long ago, but this post was allowed to go a little too long this evening. :P
Posted by Levois at 9:57 PM

Get this Recent Comments Widget