"The Curators of Dixon School" 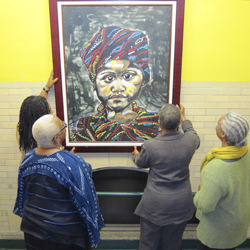 Information on this short feature film had in fact been posted to the FB page for the The Sixth Ward blog. Basically it's about how administrators at a neighborhood public elementary school had a specific vision of how their school should look on the inside of their walls. More info below provided by the Art Institute's Gene Siskel Film Center as part of their 18th Annual Black Harvest Film Festival.

Public schools don’t have to be a minefield of metal detectors, minimal expectations, and mind-numbing routine. An alternative exists right here in Chicago, at the Dixon Elementary Public School in the Chatham neighborhood, where former principal Joan Crisler and her successor Sharon Dale have implemented the idea that art should be an integral part of the learning environment, with museum-quality works openly adorning the halls. The results, in terms of student performance and morale, have been spectacular, but, as this inspiring but pragmatic documentary demonstrates, there are no miracle solutions: Crisler’s protégé Carol Briggs has an uphill battle applying the same approach at another school, and recent budget cuts have left even the most successful programs vulnerable to the axe. HDCAM video. (MR) FF

Director Pamela Sherrod Anderson will be present for audience discussion at both screenings.

EDIT: Forgot to note that the screenings for this film will take place on August 12th at 3 PM and August 16th at 6 PM at the Siskel Film Center located at 164 N. State Street. Click this link for info on how to get there!
Posted by Levois at 12:24 AM