Yup I did promise a post on the Red Line extension. This post was originally posted to The Sixth Ward blog on August 23, 2009. Of course there has been further updates since then and will be crossposted here. In addition some of the information here is out of date as there have been CTA and Pace bus service changes over the years. However, I do sincerely hope to be on the first run on the first day of service on the future extension.

The following pictures in this post were taken from the slideshow presentations of Red Line extension alternatives. Particularly the presentations you would have seen at either Woodson Library or Olive Harvey College on June 3 & 4, 2009. 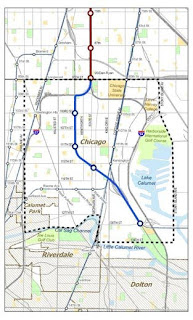 This route is the locally preferred alternative. It would roughly leave 95th Street and would be elevated along the Union Pacific Railroad with stops at 103rd, 111th, 115th, and 130th streets. There is no indication of where exactly the terminal would be although other stories about the CTA's approval of a Red Line extension would have the terminal near the South Shore rail line.

This pic is a conception of the 103rd Street Red Line station. One aspect of the proposed L extension is to eliminate the long bus rides to the 95th Terminal. If the Roseland L gets built I can only imagine that we may see another reorganization of bus routes along the extension.

For example, if students at Julian & Corliss High Schools in addition to Olive Harvey College may have to get off at 103rd Street to get to their respective campuses. That could mean that the 103 bus may no longer be routed to 95th and it'll just be an east-west bus between the current 103 bus terminus at 104th & Pulaski and the current terminus of the 106 bus at 103rd & Stony Island (well it's that bus barn on East 103rd).

I can only imagine that the 106 will be eliminated especially if the 103 will no longer be routed to 95th Street. If a bus rider had to go north on Michigan they would have to change buses instead of being able to stay on the bus to ride North on Michigan Avenue. Either way this routing should eliminate any concern there might be regarding our young people from area schools or any other traffic that comes into 95th on any given weekday.

Also since there are stations along the way I could see other routes being changed such as the Pace 353 bus. If the route of the 353 bus could terminate at the 115th Street stop instead of going to 95th. When that happens King Drive south of 95th could lose their bus service.

Well I know I can't figure out all the possible changes and before anything should happen the extension has to be built first.
Posted by Levois at 2:30 PM

Get this Recent Comments Widget