Last month I snowed posted a blurb about Morehouse College President Robert Franklin talking about a town hall meeting with Education Secretary and former CPS CEO Arne Duncan and Morehouse alum and filmmaker Spike Lee to encourage more Black men to be teachers. That town hall was conducted yesterday and Morehouse provides us a story:

Sponsored by Morehouse College and the U.S. Department of Education, the town hall meetings are part of a national initiative to get more black males interested in becoming educators, especially in the communities where they are most needed.

"The biggest impact of a child's success comes from the man or woman at the front of the classroom," said President Barack Obama during his taped remarks at the beginning of the program. "Right now, too few Americans are choosing to make that impact, especially in the African American community... That needs to change. I cant think of a better place to begin that conversation than at Morehouse at the beginning of Black History Month."

Less than three percent of the nation’s teachers are persons of color during a time when black children need black teachers as mentors and role models, Duncan said.

“The facts are pretty stark,” he said. “We have to make sure our teachers and principals reflect the great diversity of this country. Right now, that is not the case.”

According to [Congressman John] Lewis, who recalled having to elude racists to get to school as a youngster, having black teachers is paramount to the success of young black men.

“It is important to see black males in our schools teaching,” he said. “If it weren’t for Martin Luther King Jr. and black teachers encouraging me to read, I wouldn’t be in Congress today.”

Duncan said with an aging teaching workforce, up to 200,000 new teachers will need to be hired each year. But more importantly, black men can serve their country by becoming teachers.

“If we are going to do the right thing by our communities, by our families, by our men, by our country, we have to change this,” he said. “I think the men of Morehouse will be a huge part of the solution.”

I would like to see if I can find more coverage of this. The first time I ran into a man of color in elementary school was in 5th Grade and he was a rough character. This may have been a time before I learned that corporal punishment was banned from use by public school teachers in Chicago. And he didn't always used a paddle or a ruler, often he used his hands.

BTW, below is a picture of the panelists at this event: 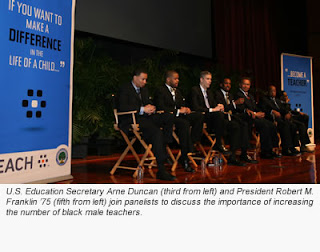